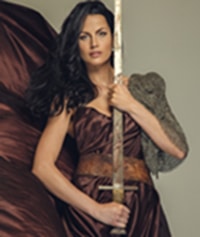 The theme of Beauty and the Beast, treated in the novel Cyberespace (esoteric thriller) by the author of these lines, is of growing importance in this 21st century that is decisive for the future of humanity.

The Slavonic philosophers have often proclaimed: “Beauty will save the world!” Today, everyone knows, or almost, that the future of humanity will belong to women, or rather to the feminine and sacred dimension of being, its interior or spiritual dimension.

The era of Aquarius, long awaited – and already begun according to some naive utopians – will be a “feminine” era. However, this era will only begin in a little more than five centuries.

>> Why the need for “more” feminine in the world?

Just look at our society to better understand. We live in an extremely materialistic period where core values are essentially masculine or yang: cults of form, novelty, new technologies of communication; law of the strongest in the corporate world; conquest and destruction of Nature; glorification of speed, yields and selfish profits, fanatic individualism, and so on. All excesses of the “masculine”!

Female values are generally regarded as weaknesses; woman herself is frequently featured as an object or a “tool” for advertising.

A rebalancing of masculine values by women seems necessary for the survival of mankind! A little more gentleness, listening, beauty, fraternity, would do no harm to this society. On the contrary!

That “Beauty saves the world” means that the strengthening of feminine and sacred values is essential to regain a harmonious society.

But, from a spiritual point of view, it goes much further:

Do you know the myth of the “vampire”? Let’s suppose you do since nowadays we can no longer keep track of movies, TV series or novels borrowing this subject made famous by Bram Stocker and his Dracula or by the American novelist Anne Rice.

What do we often see in such stories? A vampire with prominent teeth running after a blonde and fragile girl, in order to bite her neck and drink her blood.

In this kind of scene, the Beast dominates the Beauty and either reduces her to the rank of a sexual slave or takes her life. This reflects the fact that dark and animal (or instinctive) forces use masculine values (or densifying and materialistic forces) to enslave feminine (or inner and spiritual) energy.

A few years ago, a little-known Hollywood screenwriter, Joss Whedon, had the idea of reversing the myth: a blonde and fragile girl finds herself struggling with a vampire, but she wins and plants a stake in his heart! “Buffy the Vampire Slayer” was born.  This TV series has become reknowned, especially to young people in France (and in many other countries). Since then, Joss Whedon has become a well-known director and screenwriter, notably for having written and directed the two heroic films on The Avengers (2012 and 2015) that have become huge worldwide successes! This is a great victory, well deserved, for Joss Whedon!

The modern version of Beauty and the Beast – originally a mythical account of Madame de Villeneuve dating from 1740 – brings face to face a young woman, generally beautiful, and a vicious demon, a Beast. After a fierce battle, worthy of Matrix, the young woman has the upper hand and she defeats the demon. Beauty has conquered the Beast!

We recommend the excellent movie version of Christophe Gans (in 2014), with Léa Seydoux and Vincent Cassel. Christophe Gans, one of the few French directors capable of presenting an adventure with a spiritual dimension (remember his extraordinary adaptation of Crying Freeman!), realizes with this new interpretation of “Beauty and the Beast” a film full of symbols with an “interpretation” on two levels. The viewer can see it as an entertaining film for the “general public”, or perceive the esoteric and symbolic dimension, revealing how the director has understood the message of this story!

In the struggle for the future, the Beast represents the dark powers acting in the (invisible) background of the world, as well as the animal and instinctive forces in man. As for Beauty, she symbolizes spiritual or feminine values of the inner being (ie, Higher Self or Heavenly Soul), which must resist evil in order to devitalize it and recover her strength, to put them to the service of Good.

It is this choice that presents itself to the human being of today:

We refer to “mastering” the Beast: in fact, the goal is not to kill the Beast, which symbolizes a formidable astral power, but to subdue it, so that it serves the Good, as a motor for rise towards Heaven!

When the Beast is “moved” by Beauty, and he becomes fascinated by her Beauty: then the battle is won by the Good, for the Beast will give all his energy to serve Beauty. This victory shows that the human spirit or the “I” has made its choice, that of the Good, and that it has united to the Beauty.

The female character, Beauty combating the demon, emphasizes that it is not by force that we can overcome evil, but with feminine values: resistance, endurance, perseverance, love, balance, harmony, gentleness, meditation, spiritual and creative life, etc.

On the other hand, when we fight evil with evil, we strengthen it. It is the French philosopher Simone Weil (1909-1943) who best expressed this struggle against evil with these words: