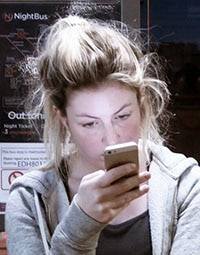 One sunny day while we were walking in the park, a group of people sitting on the grass, quite young for the most part caught our attention; all eyes were glued on smartphones!

Why would you go out to the park and stare at your smartphone?

We all know that we live in a “strange” era. An era where we are too materialistic!

What does “being materialistic” mean?

Being materialistic means being solely interested in the visible, the physical or material.

Unfortunately, reality is not only made of matter; there is also the invisible or spiritual realm.

Moreover, we can consider that all that is invisible constitutes 90% of reality, while the visible or material only represents 10% or less!

Therefore being materialistic, is to show interest in only 10% of reality (at best, since what is visible, really only represents 7% to 8%).

To believe that reality is solely made of matter or that which is visible, is a big illusion! We could even say that it is superstitious! Being unable to prove that matter or what is visible is only what exists, science has no other choice but to persistently feed us these beliefs or theories that only matter exists.

Yet, there is worse!

More and more people are becoming utilitarian! What does that mean? Being utilitarian means to be interested only with material things that are of use to us! In the best of circumstances, we could say that a utilitarian’s awareness is reduced to 1% of reality vs 10% of materialist people.

Thus, a materialistic person’s awareness embraces at best 10% of reality, while a utilitarian’s awareness barely manages 1%.

However, it gets even worse!

For a few years now, we find that a human being’s awareness is diminishing more and more. To this effect, we could use the word “Smartphonism” for the people who spend the majority of their time “hooked on” their “smart-phonic rattle”!

Like babies dragging their rattles everywhere they go, these “gadget-lovers” wonder around with their smartphone in hand. We call them “one-handers”, since they always have their “toy” in one hand and thus constantly occupied!

For lovers of the microscopic skylight, their field of awareness is even further reduced to the size of their “false-adult toy rattle” screen.

Of course, it is impossible to determine what percentage of reality they have remaining, since all they see in their smartphone for the better part of their day, is only virtual and under no circumstance “reality” or even material for that matter!

Every time they “squint” towards their smartphone, they withdraw from reality, without even realizing it. Their field of awareness becomes minuscule and is nonexistent from a spiritual point of view! This is very serious and alarming!

Envision the new generation of children and teens that have always lived as “one-handers” and how they actually believe that their “smart-phonic rattle” is a part of them!

What will become of them as adults? Will they be self-aware? Will they have the capability to be aware of others? Will they be able to experience true human interaction, while having learnt how to do everything by way of their implanted rattle?

What do you think? Do they risk turning into zombies? It is entirely up to you, yet for what it is worth, if you were to stop and think about it, it wouldn’t be surprising would it?

Did you know that an article in a major American magazine revealed some time ago that the “stars” of technology in Silicon Valley, California (such as Steve Jobs, the creator of Apple) would not allow their children to use computers, tablets or smartphones?!!!

They would send them to Waldorf Schools where you can still find blackboards with chalk, and with computers, tablets and smartphones being forbidden, children still learn through real books!

What message are these “champions of technology” sending? Obviously, they are well placed to know that this technology is dangerous (including smartphones), at the very least, provoking attention deficit disorders and killing their children’s creativity! Since they would rather not have this happen to their offspring, they deprive them of this technology.

And what about Joe Smith throughout all of this? He is persuaded that this technology is amazing and in his best interest…!

Sleep in peace brave people! We will take care of you!