A “thirst” for relationships 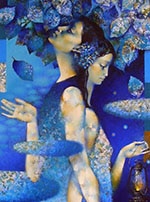 For the last few decades, we have lived in a society that has placed the supposedly “loving” relationship on a pedestal, with its “bogus” codes to which one must conform, and so each must “explode” from relational to anything-goes!

Every human being, uh sorry, every consumer, must precisely “consume” relationships, that is, “screw” as many bodies/people as possible.

Sorry, dear reader, but we use the word “screw” for both of its meanings: the first, obvious, alluding to the sexual act without love, which we will also call “perverted sexuality”; The second, less direct, in the sense of “deceiving” with a clearly pejorative connotation!

This race to fleeting relationships in order to satisfy one’s selfish desires has become an immoral sport (does not one speak of “the bedroom sport”?!), where Gaston manipulates Germaine (screws), who herself corners Norbert, who himself feels up Gigi!

Is that reasonable, Doctor?

Are we not going to destroy true human relationships? Who benefits from this crime?

This whole story is rooted in modern psychology, which is barely more than a century old, and whose kick-off comes from Uncle Freud and his tacky sidekicks!

He made you believe that your only driving force and motivation in life was sex (which he modestly called libido, it sounds more scientific!). If you add to this that you are descendants of the monkey … then, let’s go, I’ll jump on everything that moves, for after all I am barely a thinking animal! Yuck! Get rid of these lies!

Indeed, for several decades, the human being has new faculties that he can acquire according to certain conditions. Of course, no one told him! Yet there are many systems in place, so that he never accesses these new faculties!

In the field of relationships, the new age movement (or personal development), already mentioned, is very gifted to mislead people with, in particular, the pseudo Tantra brought up to date for all gogos ready to swallow anything. Yes, it is not because you are looking for spirituality that you must adhere to anything, or rather to what titillates or excites your ego!

For the rest, we have seen that psychology has a great responsibility for knowingly misleading people in false relations based exclusively on sexuality, and worse still, by making them believe that sexuality and love are the same!

What is this new faculty that is hidden behind sexual overflow?

It is possible now, to access a quality of Love difficult to imagine, but that can transcend your relations and even transform your sexuality (because this is negative only if it is used alone! Subordinated to Love, sexuality becomes a good force to share with the person you love!).

What happens if you stay at the level of psycho relationships with perverted sexuality (or without love)?

By adding the mobile phone and social networks on the Internet, both of which aim at destroying relationships (replacing the true relationship, face to face, with the virtual relationship, conducive to all sorts of fantasies and sinister outbursts!), you will become more and more suspicious and insecure by your relationships.

You will end up staying at home, fantasizing on the Internet!

Of course, you will never gain access to true Love, which is a tragedy for humanity! What a waste !

The matrix (materialistic and consumerist society) = 3

The human being (naive and very conditioned) = 0

The matrix (materialistic and consumerist society) = 3